Plagiarism may be defined as taking another person’s work and presenting it as one’s own. This action may typically be categorized under one of two headings: intentional and unintentional.

Intentional plagiarists are those who knowingly break the U.S. American rules governing accepted standards of academic conduct. The reasons for violating established standards of academic conduct may include internal and external pressures to succeed, inability or lack of confidence in one’s ability to express thoughts in English and rejection of U.S. cultural norms as are applicable to academic behavior.

Intentional or not, plagiarism is considered a very serious infraction at U.S. American universities. In fact, plagiarism is often described as the theft of another’s intellectual property. While such an abstract notion of property may sound strange, from the U.S. American perspective a student who fails to distinguish his or her own thoughts from ideas borrowed from others commits the same crime as one who steals money from a stranger and then claims that money as his or her own.

Schools expect students to behave ethically and embrace common values, but behaviors and values that are accepted in one culture may differ significantly from what is accepted in another. As with most violations of a culture’s accepted standards of behavior, a violation of academic ethics carries serious consequences for the violator. For instance, a single act of plagiarism can result in a failing grade, temporary suspension or even permanent expulsion from the university. Moreover, student violators may find it difficult to obtain letters of recommendation from former professors and may be required to disclose previous incidents of academic misconduct to other institutions or employers. Obviously, plagiarism is a very serious issue, but how can international students studying in the U.S.A. understand academic ethics within the context of the U.S. American national culture? How does one learn the rules of this culture? 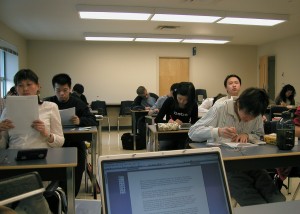 The cultural value of individualism requires students to respect the rights of individuals whose ideas they have borrowed by clearly distinguishing another’s ideas from one’s own and using an established method for doing so. Individualists also expect students not share answers on an exam or even discuss the questions with friends who may need to take the exam at a later time in the day.
Magied Alsqoor, an international student from Saudi Arabia and President of the International Students Association at St. Cloud State University, explains the influence of cultural values as follows:

I think people in Saudi Arabia are very close to each other and so we grow up helping each other. It’s a good thing, but it becomes a problem for Saudis in the U.S. We often get out of an exam and share questions with others and we think it’s a common thing because we grow up in a society that tells us to share things and wish the best for your friends. In Saudi Arabia, your accomplishments are not recorded by your name, but by your tribe or family. For instance, when a guy from Najran succeeds, it’s considered as a success for the whole city. In the U.S. this is not the case.

A second cultural value in the U.S.A. is direct communication. This means that U.S. Americans prefer messages that are explicit and very low in context. As an example, clear expectations for academic behavior are commonly found printed in university publications such as a Student Code of Conduct, Honor Code, or Institutional Statement on Academic Integrity. The idea is that by providing students with easy access to the accepted standards of conduct, accidental violations of academic ethics will be greatly reduced.

Conclusion
Before beginning classes, it is a good idea to search the website of the institution one wishes to attend in order to locate and familiarize oneself with academic expectations. After arrival, one should be able to find many resources exist at the university for helping students to avoid plagiarism. If unsure of how to properly use citation styles, seek assistance from a professor, librarian or writing center staff (if applicable). If cultural values seem to pose a challenge, speak with the international student advisor or a leader of the international student community who is mature enough to provide cultural insights.

Resources
While it is beyond the scope of this article to provide an in-depth explanation of U.S. American cultural values, appropriate citation styles and strategies for avoiding plagiarism, many excellent resources are available online.
•    Plagiarism
o    Excellent resource for avoiding plagiarism and understanding citation styles is available from Purdue’s Online Writing Laboratory
o    The Robert Gordon University’s Plagiarism Project contains much useful information including a very thorough report on cultural issues associated with plagiarism for international students, links to plagiarism in the news and an overview of software commonly used by universities to detect plagiarism
o    Kent State University provides links to multiple tutorials and resources for students
o    Visit George Mason University’s website for a sample Academic Honor Code

•    Cultural Values
o    The University of Minnesota’s Center for Advanced Research on Language Acquisition provides a very useful introduction to core cultural values. See the last two pages of the document for descriptions of values
o    Studyabroad.com has a very useful online handbook for students planning to study abroad

St. Cloud State University is home to approximately 17,000 students, holds national and international accreditations, and  offers more than 200 academic programs taught by nationally and internationally recognized faculty. More than 1,100 international students from over 80 countries call SCSU home. The University welcomes international students by offering in-state tuition via the Academic and Cultural Sharing Scholarship. The university is located on the banks of the beautiful Mississippi river in the state of Minnesota, which is in the upper Midwestern portion of the United States.

We invite you to explore the many opportunities at SCSU through our website www.stcloudstate.edu If you have questions regarding International Admissions, please email world2scsu@stcloudstate.edu

Your ticket for the: Plagiarism from a Cross-Cultural Perspective