Size: just a bit over 1,600 undergraduates

Greetings! Today, I would like to invite you along with me to Kenyon College, a small liberal arts college located in Gambier, Ohio. Kenyon enrolls about 1,600 undergraduates each year with the majority of its students coming from the US (the Mid-Atlantic having the most students enrolling) and abo0ut 5.3% from around the world.

Getting to the International Student Section

From the main page, click on the “Admission & Financial Aid” link and then “Apply to Kenyon.” From here, you will be lead to a page that will guide you through the steps of applying for admission to Kenyon College. In order to get to International Student Admission, click on the “International Students” link located on the left hand side of the page under the heading “Apply to Kenyon.” This link will lead you to a page that will describe the requirements you will need to meet before you can apply to Kenyon College. 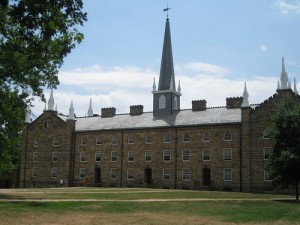 I have to be honest and say that I expected Kenyon’s college to be much more than it turned out to be. Based on the pamphlets and literature about Kenyon, I had (unrealistically) high hopes for Kenyon – hopes that fell a little short when I got there. Kenyon sells itself very well, which is not surprising since it is known to be a “writer’s college” – and honestly, what should I have expected from an institution that publishes the critically acclaimed Kenyon Review?

Don’t misunderstand; Kenyon is still a very lovely place. It is very in-tuned with its natural surroundings (lots of trees and open spaces), and geared towards providing a sanctuary upon a hill. I guess if I had to describe Kenyon in one word, it would have to be “scenic” – if you are an outdoorsy person, I think it is safe to say that you will love Kenyon. If you are a lover of big cities, and thrive on a fast paced living environment, you might want to look elsewhere. Most students choose to live on-campus at Kenyon all of their four years. Living “off-campus” and living “on-campus” is basically the same thing when it comes to Kenyon since Gambier exists for the College. The College itself is dispersed throughout the city of Gambier, so much so that they seem almost synonymous with one another.

As for residential living, Kenyon is divided up into a northern end and a southern end. According to a current Kenyon student, the North end of campus houses most of the first-year students, and then the more “studious” Kenyonites. The South end of campus, on the other hand, is home to Old Kenyon and the fraternity and sorority hall.

After the first year, students can choose to move out of the traditional residence halls into on-campus apartments, suites, and also themed housing. These “cultural spaces” (as referred to in the Kenyon ViewBook) can range from the Showden Multicultural Center, the Brow Family Environmental Center, to the Unity Hall (for  LGBT students). 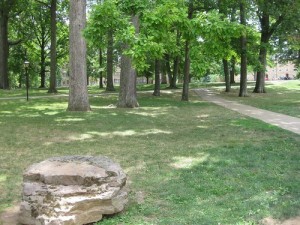 Kenyon students are very well rounded people, and tend to take advantage of the 100+ student organizations offered at the College. Since most of them are incredibly brilliant, they do spend a good portion of their time studying, but other than academic pursuits, Kenyon students are also big fans of the great outdoors. Kenyon’s campus has a lot of walking trails, a river for kayaking, and wide-open spaces for recreational activities. Students are very active, and the KAC (work out facility) is usually quite packed.

As far as the party scene goes, there are, of course, parties at Kenyon. However, Kenyon is more of a “hang out” college than one whose Greek life runs the social scene. Although Kenyon does have fraternities and sororities, (around 20% of the population) its parties are not exclusive like other universities; Greek parties are open to everyone. The typical Kenyon social life usually includes experiencing the local music scene, going to the movies and plays, the occasional themed party, and taking advantage of the great outdoors. 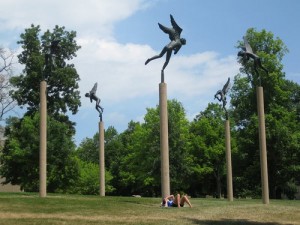 Kenyon is a very special place – but it is also out in the middle of nowhere; the drive up to Kenyon was particularly interesting because I thought I was going to get lost!  The drive up to Kenyon had a lot of narrow roads, and it had been quite a long while since I had been in rural Ohio (Gambier is very close to an Amish settlement).

Yes, Kenyon is a bit small and a bit isolated, but it is definitely filled with the best and brightest. Some of these students (and professors!) could have gone to Ivy Leagues but didn’t. You have to wonder why this is, given how sought-after and revered the Ivies are within academic circles.

I must admit that I had to step back and ponder the question myself. Why would they choose Kenyon? After a bit of thinking and reevaluating, I think one of the reasons is because Kenyon is a very genuine and supportive community. It seems like Kenyonites are not particularly concerned with labels; rather, they choose to help one another engage in what you should go to college for – to learn as much about the world as you can, to figure out how you can contribute to it, and to leave with the confidence to start answering the “big questions” you asked while in school. I invite you to learn more about this very curious and very special sanctuary on the hill.

Thanks for reading! For more information about my tour, I invite you to read on! And as always, please check out the campus pics (only a sample are featured below) here. Until next time!

Your ticket for the: Kenyon College