Size: just a little over 2,100 undergraduates 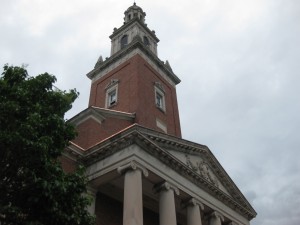 Hello! Today, I’d like to invite you along with me to Denison University, a liberal arts college located in the New-England-esque town of Granville, OH. Denison University enrolls just a little over 2,100 undergraduates annually, with only 30% coming from Ohio and the rest from all over the country and around the world. A large majority of those coming from “out of state” are from the New England area, and unusually, the city of Chicago, IL. According from The Princeton Review statistics, the break up of the student body at Denison are as follows:

Getting to the International Students section

As always, we will begin the review with a tutorial on how to get to the International Students portion of the website. From the home page, click on the Admissions link that is located in gray at the top of the page; this will lead you to the general Admissions website. While on the Admissions website, locate the “International Students” link located on the left hand side of the page. This link will take you to a page where you can learn more about life at Denison, answers to frequently asked questions, and also apply for admission. It’s definitely one of the more user-friendly sites that I have seen or written about!

Now that we have taken care of the tutorial, let’s get on with the review! I have mixed reviews about my time at Denison. Denison’s campus is very lovely in a classic kind of way with its historic red-bricked buildings. It was designed by the man who designed the notable campuses of Wellesley and Stanford, as well as the widely loved place known as Central Park in New York City. Given the accolades of the man behind the design, I have to be honest and admit that I expected more out of Denison. Yes, it was a lovely campus, and given how beautiful it was in the summer, I imagine it is even prettier in the fall since fall in the Midwest is quite a sight (even though it’s a little short lived sometimes!).  Despite all of this, however, I didn’t find Denison to be very “exceptional;” it just felt like an east coast college (with the accompanying town) awkwardly located in Ohio. For me, everything about Denison and Granville itself screamed “east coast” – its historic buildings, its isolation from the rest of the surrounding area, and yes, its stereotypical snobbery … but more on that later. 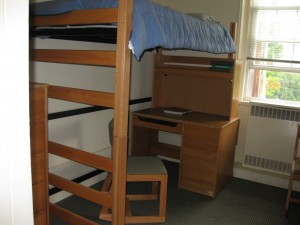 As far as campus living goes, Denison is definitely a residential campus. All freshmen are required to live on campus, and even after freshmen year, most of the student body will choose to remain on campus. The reason why students choose to do this is because student life is found on campus, rather than in Granville. Denison is literally located on a hill that overlooks the rest of Granville, and this isolation from the surrounding town, as well as the vast number of resources available right on campus, contributes to what is affectionately known as the Denison Bubble.

Inside that Denison Bubble is an array of on-campus living options, ranging from residence halls (mostly co-ed, with the exception of 2 single sex dormitories), to old fraternity houses that have been renovated into substance free living facilities, to the Homestead (housing focused on “ecological sustainability”), and apartment style buildings for upperclassmen.  One of the living facilities that is relevant to our interest is Kappa Sigma, a former fraternity house that has since been renovated into the Language and Cultures House. The Language and Cultures House is a new option for first year students, and its hope is to encourage its residents to interact with one another in the language(s) inside the house and to foster a sense of community. Last year (2008-2009) was the first year this option was available; whether or not it was a popular one, I cannot say.

In terms of campus life, Denison is home to 150 student organizations, ranging from academic/honor societies, various branches of student government, community service organizations, campus entertainment, and 16 Greek organizations. Because Denison attracts some of the brightest students around the nation, Denisonians have a “work hard, play hard” mentality – which might explain why 35-40% of the student body participates in social fraternities and sororities. Although Greek life is not as overwhelming at Denison like it used to be, it still resonates on a campus of only 2,100 students. As far as entertainment goes, most of the partying occurs in the residential halls (since a majority of the student body lives on campus), and it occurs quite frequently. Also, I guess it’s also worthwhile to mention (yet again) the size of Denison; with only 2,100 students, you will get to know a large portion of the student body. It’s not easy to “hide” at Denison.

The sense of community is very strong on Denison’s campus, and while there are definite positives to a tight knit community, the feeling of isolation is also a very distinct possibility. I think this is probably a good time to add that Denison is not for everyone. Denison doesn’t attract many students of multicultural backgrounds, and only 4% of that group is coming from outside of the US. A possible reason why these numbers are so low could be because Denison caters to a specific  “type” — a type mostly composed of those of upper-middle and upper class up bringing, typically white men and women hailing from the New England area — which is kind of perfect since Granville looks like a typical New England town. With that being said, I think it’s easy to see from its statistics that Denison has a bit of a diversity problem. Yes, it is important to “define diversity in many ways” – but if Denison is struggling in both of these areas, then I think it’s safe to say that it does have a bit of a problem. This is not just my opinion  — it’s a common complaint on such well-used student review sites such as College Prowler, Unigo, and also TheU. With that being said, I do not doubt that Denison has a tight knit community. It’s just that this community can be a bit suffocating for those who do not meet certain criteria, and consequently, are left on the outside. This is perhaps my biggest complaint about my visit to Denison — I didn’t feel particular welcomed. 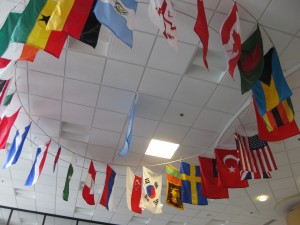 For those who with devote faith, Denison has a Center for Religious and Spiritual Life which is devoted to “fostering religious and spiritual enhancement” in the Denison community. This center works with the religious groups on campus in helping its students celebrate their respective faiths. In terms of services, Swasey Chapel has Catholic mass every Sunday at 4:30pm, multi-denomination services at 3:00pm, and Quaker services on the 4th floor of the Student Union. As far as the other faiths go, however, one would need to go off-campus into Granville for such services.

As I was sitting in Whit’s Frozen Custard (a local-favorite ice cream shop in Granville), I tried to figure out how to write this review. All I can really say is that Denison is not for everyone. I’ve been on a lot of college visits, and while most schools will try to sell the point that theirs is the college where you can “find your niche,” I don’t believe this to be the case at Denison. There is already an established “niche,” and what you are expected to do is fit into it. This sounds a bit harsh, but if you do meet the criteria of a “typical Denison student,” these will be the best four years of you will ever experience. Denison is a tight knit community filled with very bright people who work very hard to be where they are. The professors are brilliant, very interested in getting to know their students (you cannot hide — they will know your name), and whose curriculum will challenge you in every way. Entering Denison is like entering a very exclusive community, a community where everyone seems to know everyone else, where everyone (and their many resources) will promise to “take care of you” in the future. This exclusive vibe certainly has a lot of appeal – whether or not you should take the risk … well, I’ll just leave that up to you.

For more information about my visit, please read on! And as always, be sure to check out the campus photos (only some featured below) located here. Thanks for reading!

Your ticket for the: Denison University