Its been a great fair so far, thank you to all the students who attended, spoke to the college representatives, and even submitted applications in both Kuwait and Bahrain.  We started on March 17th, 2009 at the Marina Hotel in Salmiya, Kuwait with the Embassy of the United States Kuwait Public Affairs Officer cutting the ribbon and officially opening the fair.  About 100 students were waiting to come in, which made t

he college and university representatives ready to expect a busy event.

The US Embassy Visa Counsel spoke to the audience about the process of applying for a student visa to the United States, the type of information that will be needed for a successful interview, and the numbers of students who have been approved for a visa in the past year. The students and their parents reacted very positively to the information as there is confusion about the US visa application process, and kept the US Embassy visa counsel very busy all night asking questions.

“I was very happy with the outcome of the Kuwait fair, we had three completed applications that I already faxed to my office.” Mr. Wes Roy, Associate Director of Admissions, Roger Williams University

Did you attend the fair? How was your experience? Write a short review of your visit to the Kuwait fair below and let us know! 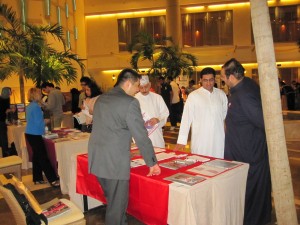 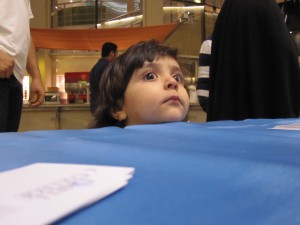 Our next stop on the Middle East US College tour is Manama, Bahrain – with the fair on March 17th, 2009 at the Sheraton Bahrain Hotel.  While things started off a little slow but students and visitors began coming in after a short while and everything went great.

There was a very significant amount of Saudi Arabian students who had driven over from the Eastern Province of Saudi Arabia and told us there was a 4 hour delay on the bridge to cross. The students visiting the fair were 60% Bahraini and 40% Saudi and many of the students were interested in graduate programs.

“The fair went very well and we had a steady stream of interested students”  said Stephanie Enstice, Florida Institute of Technology

Did you attend the fair? How was your experience? Write a short review of your visit to the Bahrain fair below and let us know!

Your ticket for the: US College and University Fair in Kuwait & Bahrain