With the excitement building, the questions mounting, and the pilot class of the Iraq Education Initiative moving closer to beginning their educational journey in the United States we have fielded many questions about various aspects of the scholarship and answered a few in this article. While there are still many unknowns and pieces of the program that are still coming together, we were fortunate enough to speak with representatives of the US Embassy in Baghdad, Iraq who have worked hand-in-hand with the Director of the Iraq Education Initiative to ensure success for the Iraqi students heading to colleges and universities in the United States. 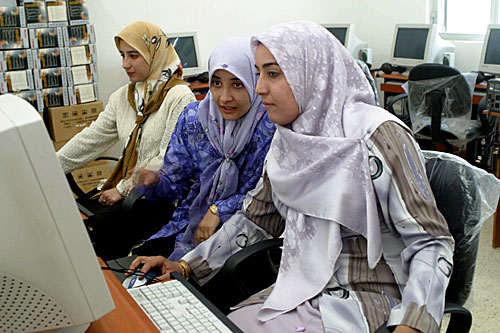 We all know what a speed bump the visa application process can be for unprepared students, and until a few months ago, Iraqi students accepted into American universities were required to leave Iraq and apply for their student visa at a “regional office”.  Regional offices are located in Syria, Turkey, Egypt, and Jordan where the Iraqi students would have to travel for their interview and return to receive their stamped visa – a huge financial and stressful burden on the applicant and their families.

Mr. Jeffrey Lodinsky, the General Consul at the new US Embassy in Baghdad spoke to us this week about the many changes and initiatives that they are undertaking to streamline the student visa application for Iraqi students.  Since August 2008, student visas have been processed in Baghdad, the Embassy has “most modern facility, our interview windows are the most modern in the world” said Mr. Lodinsky, and is well equipped to deal with large numbers of visa applicants.  “We encourage Iraqi students both in the region and in Kurdistan to apply at this location, we have a culturally sensitive staff and Arabic speakers who understand” the unique applications from Iraqi students.

Mr. Lodinsky explained that one of the priorities of Ambassador Ryan Crocker, who has now departed from his post in Baghdad, was to ensure that the first clients served by the new Embassy were student visas.  Ambassador Crocker felt that it was crucial for long term bilateral relationships to accommodate Iraqi students interested in higher education in the United States.  Several hundred students have already received their F-1 visas, and are already at colleges and universities around the US.

Efforts are underway to expand the visa reciprocity between the United States and Iraq, which will allow F-1 students to receive more than the current 3 month, single entry visa.  In comparison to most F-1 students from other countries who receive 5-year multiple entry visas, allowing them to visit family in their home country during summer vacation or winter break, the Iraqi student will face a much more restrictive visa.  Students will be required to reapply for their visa renewal at a US Embassy if they leave the United States in order to be allowed to reenter. Changes to the student visa may be available in the coming months.

The procedure for the actual application is identical to that in other countries, there is no specific paperwork required, however, Colleges and Universities should explain that the students must be prepared for the interview at the Embassy and bring all the required documentation.  Colleges and Universities must be cognizant that the lack of postal services in Iraq will require they send time sensitive documents such as the I-20 to the students via air courier (such as DHL or similar) and not regular post.  The Embassy officials encourage students to apply as early as possible, as they do expect that the application will take several weeks to process, allowing the student to receive their I-20 as early as possible will increase their chances of a successful visa application process.

“This is a special group of foreign students, and
I really encourage the universities to think of these
students in a different way, be mindful of
their heritage” – Helen LaFave, Cultural Affairs Officer

“This is a positive for students, for universities, for US-Iraq relations, it’s a positive in every way” said Ms. Helen LaFave, Cultural Affairs Officer at the US Embassy in Baghdad, “but one of the things universities need to think about is that this is a whole population of Iraqi students, not just another block of international students”.  While there has always been a flow of Iraqi students heading to the United States for higher education, as far back as the 1920’s and 1930’s, there has been a multi-decade gap where the Iraqi population has been very isolated from the US.

“These students have been through a lot in the last 50 years, this is a special group of foreign students, and I really encourage the universities to think of these students in a different way, be mindful of their heritage, and not treat them the same way as students coming in from other countries”

The Embassy officials spoke of Fulbright Program and caliber of students the program has sent.  Feedback from the students and the universities show the Iraqis are welcomed into the class room, they are engaged and active both within the classroom and out in the college community. The students are settling in to their dorms, making American friends, and taking every advantage of the Fulbright scholarship in the best way possible.  According to their previous experience, this is not uniformly true, there are Fulbright students from other countries, who are overwhelmed by the experience and retreat to their dorm rooms or even drop out.

“Iraqi teachers are notoriously difficult graders, a “C” in Iraq is a “B” or “A”
anywhere else, I have interviewed Fulbright students who
had mostly “B”s and “C”s on their transcripts”
Mr. Jeffery Lodinsky, Consul General – US Embassy Baghdad

In speaking with some university admissions officers and advisors, they relay that they are impressed with the quality of the students coming from Iraq. While they study and work hard, they do not avoid contact with other students or just sit in their dorm room.  Ms. LaFave added that the students bring a tremendous amount of diversity and enlightenment to the university campus, higher education institutions are eager to Iraqi students apply there, “educationally they are very impressed”.

All the Embassy officials encouraged admissions officers to review the transcripts of the Iraqi applicants carefully, and note that there is no grade inflation of any kind in Iraq.  “Iraqi teachers are notoriously difficult graders, a “C” in Iraq is a “B” or “A” anywhere else, I have interviewed Fulbright students who had mostly “B”s and “C”s on their transcripts”  said Mr. Lodinsky.  He continued “The Iraqi students are very interesting but may not have the array of extra curricular activities that an American student may have”.

While students now do have the opportunity to take the TOEFL at many locations around the country and the GRE twice a year, Ms. LaFave stresses that these are “raw scores, preparing for these standardized tests is not an idea that has permeated this society” and admissions officers need to take into account when comparing the scores of international students from countries such as China and India who generally study intensely for the standardized tests. The SATs are currently not offered in Iraq, however, there are plans to begin administering the test inside the country this year.

Ms. LaFave had noted earlier that Iraqi parents “live for their children’s education” and with the new Iraq Education Initiative will be pushing their kids to apply to study in the United States. She went on to say “Iraq is very interested in engaging with Americans people to people, through education and through students. Iraqis are a fascinating engaging people, universities will find them to be a great addition to their campus”.

With the tone of the discussion with the Embassy officials so positive throughout the conversation, the collaborative effect of assisting students through the visa application process both from the Iraqi government and the US Embassy is evident. It will be a team effort to ensure the success of these students, and colleges and universities are encouraged to look at these students and if there will be active recruitment efforts, to think about how to welcome them onto campus. Many of the students will need some extra assistance to adjust to their new environment and become a successful and engaging part of the campus experience.

More information from the US Embassy Baghdad – http://www.iraq.usembassy.gov

Subscribe to our blog and receive updates on new posts automatically

Your ticket for the: Iraq Education Initiative and Visa Application Process at US Embassy in Iraq