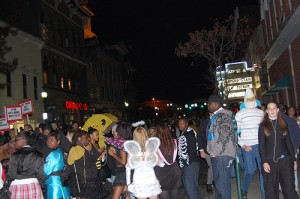 American college students love dressing up for Halloween. You will find costume parties on university campuses all across the country in the month of October. The outfit choices range from strange, scary, hilarious or risqué.

Ohio University in Athens, Ohio is known for its history of wild Halloween parties. According to the Athens County CVB, attendance estimates are anywhere from 10,000 to 30,000 each year for the party and the number fluctuates depending on the weather. Many come out of town to join the celebration.

Emily Shuki, a senior at Ohio University says that the party could easily be compared to Mardi Gras, but with lots of weird costumes and in Ohio. “It’s a big block party uptown where everyone goes to listen to the music being played on sound stages at either side of the street and where everyone is dressed in costume.”

When in Athens you have to be especially creative in coming up with a costume. “I always appreciate the costumes that require some thought or are depictions of pop culture events or persons,” said Emily. “I saw a guy dressed as balloon boy this year, and lots of Lady GaGas.”

While most people in attendance are just there to have a good time, things do get out of hand at times. Emily said that someone set a couch on fire this year and every Halloween there are student and non-student arrests. “I think celebrations at any other school are probably similar to ours, it’s just the number of visitors we get here that make it such a crazy weekend,” said Emily.

Although Halloween this year and come past, it’s not too late to start thinking about your costume ideas for next year. “I think everyone looks forward to it, at least a little. It’s the opportunity to be someone other than you,” said Emily. “…college is one of the last times you can live it up without making a complete fool of yourself.”

Hannah DeMilta is a senior at Otterbein College studying Public Relations with a minor in Deaf Culture and Language (ASL). She has studied abroad in Australia and loves traveling whenever possible. She has held several internships in the PR & communications field and hopes to work in the non-profit sector one day. She also loves speaking with students interested in studying abroad, so please feel free to start a conversation: http://www.linkedin.com/in/hannahdemilta

Your ticket for the: Halloween Crazy: 2009 Recap