Thinking in A Foreign Language 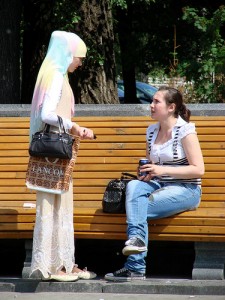 The book 1984 was written by George Orwell back in the 1920s 1940s (thanks to our commenter Santa for picking that huge mistake up). While it is mainly a book about Orwell’s vision of the future, it also offers those who study language an important lesson. The main character, Winston, must understand why two plus two is five. His teacher explains that it is simple, because the party said it was. Four is simply a label, and if the party changes the label, then two plus two is five.

While the U.S. has not been overtaken by the oppressive government Orwell foresaw, he did teach his readers that words are simply labels. What I, as a native English speaker think of as my head, my Swiss-German exchange student thinks of as my Kopf. My Kopf doesn’t change function or shape, just because I call it a head. Words are simply labels we put on the world around us. A foreign language, like German in my case, is simply another set of labels.

So it makes sense, when learning a foreign language, to start thinking with the new set of labels as soon as possible. This isn’t a concept I came up with all by myself, major language learning companies teach it in their courses. Instead of vocabulary lists, with words in the native language on one side, and the foreign language on the other. They use pictures, pictograms, and symbols to demonstrate a words meaning. They simply change the label.

Like when you were little, and learning how to read and write in your native language, the mind starts to relearn labels. The mind starts associating the word Kopf with the same objects as head. Slowly, as the vocabulary grows, or perhaps simply as it becomes easier, thought in a foreign language occurs. It’s nothing that can be forced, but slowly my Kopf is no longer translated to head. The word Kopf is seen and without translation, it is understood. As simply as if the word head had been said, Kopf is thought and said.

This is not a process that can be rushed, or forced. Your mind will think in the foreign language, when it feels ready. All that you can do (at least consciously) is let it happen. It’s a strange feeling, but when it becomes natural, a certain sense of pride washes over you.

A strange thing starts to happen, as foreign language skills begin to improve. Native language skills start to disintegrate. This is especially a problem, when exposed to a foreign language for a long period of time. Sometimes this is in the form of simply thinking and saying Kopf instead of head, in the middle of an English conversation. Sometimes it’s in the form of an English sentence, with German grammar structure. Sometimes, it’s simply speaking in one language, when you meant to use the other.

Learning a foreign language is a process, that is sped up only by spending time surrounded by that language. Perhaps it will only take a week, to begin thinking and functioning in English, perhaps it will take a little longer. Getting to this point in your language skills, is part of the experience of living abroad, and is a skill that will make life abroad much easier.

Your ticket for the: Thinking in A Foreign Language

Thinking in A Foreign Language