After five years of college, and living in the dorm both in the U.S. and abroad, I’ve learned a little bit about how to deal with roommates.

My first roommate, in Salzburg, Austria, was a French girl, who spoke better English than I did. She was pretty cool, and very nice. A bit of a neat-freak, but we got along ok. I kept my mess hidden in a corner between my bed, the wall, and my desk and she didn’t say anything when it sometimes snuck out of its corner. Left alone, we would have been great roommates the entire year. 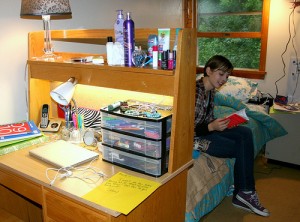 The only problem  I had with my French-Roommate was her Austrian boy-friend. It wasn’t even that he spent the night every other night, and every weekend. I learned to live with that, and accept it, if not like it. It was his attitude towards me, which drove me to the point of hatred and beyond..

Herr Sauberraum, which means Mr. Clean Room in German (my nickname for him, since I never really learned his real one) was in the room visiting with his girl friend. I wasn’t feeling great, so I had a friend over to help me out with cooking. We were talking on my side of the room, and they were at her desk. Herr Sauberraum looked over at us. The four of us begin to talk with one another, and my friend demonstrates some of the moves she had learned in karate. As the conversation winds down, and we slowly break back into two groups of two people, Herr Sauberraum opens his mouth. “You know,” he said, “if this was my room, and it was this messy, my mother would kick my butt. And then clean it.”

It was a statement none of my multi-cultural training could have prepared me for. Cultural differences of men and women rolls aside, even with cleanliness aside, what was he talking about? My roommate, being the good roommate and girlfriend she was, made an effort to keep her boyfriend out of the room after that. This eventually led to her moving out of the room after semester break.

After returning to the U.S., my last three years in college landed me with 2 good roommates, and one bad. The first good roommate I had, was a girl I had never met until I moved in. Over the first couple weeks, we got to know each other. We shared stories, and carried on rather random conversations. She wasn’t my closest confidant, but we were friends enough that living together was enjoyable and not an imposition on each other.

Good roommate relations takes a couple things: patience, tolerance, and consideration. You don’t have to love your roommate, or even be friends with them, as long as you have these three things.

Patience for a roommate is remember that, like you, your roommate is only human and will forget to do something sometimes. Maybe they had an unsually busy week and forgot to take out their trash. Maybe they left something out, or didn’t realize you were in bed when they came in late. Be patient with them the first time something like that happens, and approach them kindly after the second time.

Tolerance. Remember, you may not have class until noon the next day, but your roommate might have an 8 am class, and might need to wake up very early. In the winter, most parts of the country is still dark until 730 or 8, and so they may need to turn on a light.  Tolerate a little noise, remembering your roommate is living their own life on their own schedule.  Consideration. Think of your roommate, before blaring your music or television. Ask if you will be doing something that might annoy them, before actually doing it.

Most dormitories have some sort of roommate contract filled out, where it states when the roommates agree to and not to do things. If you live in an apartment off campus, you might want to look online and find one. Although, rarely actually needed, the contract does bring up issues (such as noise, appropriate times for things, and ways to settle a disagreement) that might not be brought up otherwise.

Elissa Yonkers is a recent graduate from Bowling Green State University, with a Bachelors of Science of Journalism with a focus on Public Relations, and a very strong minor in German. With several internship experiences under her belt, she is looking to widen her experience and knowledge with a job in corporate communications, public affairs, or work in a public relations agency. Connect with her here: http://sites.google.com/site/elissay/

Your ticket for the: Serenity Now! Dealing with Roommates