Getting Around Campus without a Car

Getting around within the United States, without a car, can seem like a daunting task. America is a car-nation, as the evolution of drive-in movies, drive-through restaurants, and car side to-go service has proven. Despite all of this, not all American college students own cars. In fact, many colleges do not allow freshman (some also discourage sophomores) from bringing a car onto campus. So how is an international student supposed to get around car-focused USA without a car? In the next couple of posts, I’ll go through the pros and cons of getting around a college town, and the country without a car.

Starting small is the simple difficulty of living in a college town and not owning a car. Unless a student attends a college in a big city (New York City, Los Angeles, Washington D.C., Chicago etc.) with a reliable mass-transportation system, even getting from point A to point B in a college town can be difficult. 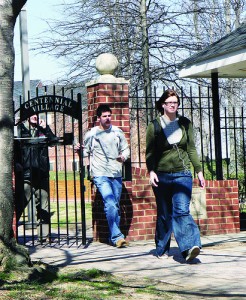 The simplest option is to walk everywhere. It is a good source of exercise, you learn the sights and sounds of the area, and it’s environmentally friendly too! Of course, if your campus is in the mid-west, north east, or central United States, this might not work so well, unless you are a fan of freezing.

Many campuses are “walking campuses,” meaning they are designed to be traversed by foot, the towns they are built in usually are not. While walking to and from the grocery store, hauling ten pounds of groceries and a case of Coca-Cola in negative nine degrees Celsius, while the wind blows in your face at thirty two km/h , and it snows constantly, is a unique cultural experience; it is one most people would prefer to avoid.

Bicycles offer the same seasonal, reasonably cheap, option. A bike, without to many fancy features or options, will cost anywhere between 60 to 300 dollars. Really nice bikes can cost up into the thousands. A good bike lock, which is a must with any bike, will be between 10 and 30 dollars. A helmet is also highly recommended. Students can find bikes, locks and helmets at major stores (Walmart, Target, Kmart, Mejier), as well as sporting good stores (Dunhams, REI, Sports Authority). 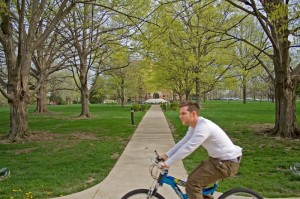 Getting around on a bike is obviously faster, and like walking is a healthy and eco-friendly mode of transportation. Many campuses have bike racks, where students can park and lock their bikes up, in front of the dormitories as well as academic buildings. Many off campus places, such as the store, do not have such bike racks, and so students will have to be creative in how they lock up their bike.

American bikes are also often not designed with baskets or places to put books or bags, and so transporting things that don’t fit into a backpack can be difficult. Baskets and racks can be bought separately, and self installed, but this can be costly. Storing the bike in the winter months can be tricky. Leaving it locked up at the bike rack is often the only option for students living in the dorms. Those renting an apartment could take it inside, depending on the space issues.

While most cities will have some sort of bus system, the reliability of the system will vary from city to city. Asking other students whether taking the public transportation is worthwhile, is recommended. Even if no one you know has used it, many students will have heard if it is reliable or not. If it is, Google Maps can help you find bus stops and routes. There is an option, after finding a car route from point A to point B , to choose “public transportation” as the means of transportation. The directions will tell you when the bus leaves, if you have to change buses, as well as how long the trip should take.

Another form of mass-transportation is offered by larger Universities. Most universities offer buses, which travel around campus and off campus. These buses are usually free to students and often go to such places as the local grocery store or large stores, the mall, and other popular places or off-campuses residences. Some buses may even go to popular off-campus housing for students. Like mass-transportation, the reliability of the University bus-system varies, but with enough time set aside, the system like this can be useful for those without a car. 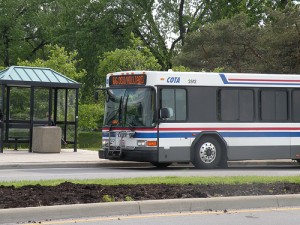 Taxis are probably the most expensive way to get around. Prices will vary from city to city, but they are generally very reliable. Cabs are often the transportation of choice, when students are out on the town late at night. While they do not line the streets of American college towns, cabs can be found in the yellow pages (http://www.yellowpages.com/).

Friends with cars are perhaps the most essential part of living in a college town without a car. Students with cars are most of the time willing to help those without get around. Asking for a ride can be awkward at times, if it is not offered. Although, if a friend of yours is going to the grocery or out to the mall, asking to go with them, is often not a problem. Don’t be offended if they say no, they most likely have a valid reason for turning you down, most likely scheduling issues. Probably the most important thing to remember is: Make sure not to just be friends, because they have a car. People will be offended and may not want to give you a ride, if you only ask to hang out with them when you need a ride

Finally, students without cars are not stuck in their dorms or apartments, doomed to live alone and bored for their entire college career!  A combination of the options mentioned above are just some the ways a student to get around town as easily as if they owned a car.
Elissa Yonkers is a recent graduate from Bowling Green State University, with a Bachelors of Science of Journalism with a focus on Public Relations, and a very strong minor in German. With several internship experiences under her belt,  she is looking to widen her experience and knowledge with a job in corporate communications, public affairs, or work in a public relations agency. Connect with her here: http://www.linkedin.com/in/elissay

Your ticket for the: Getting Around Campus without a Car

Getting Around Campus without a Car